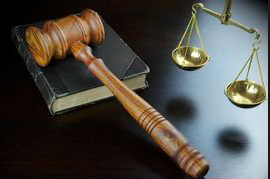 In “Murdering Babies Part 1; Can Judges Make Laws?” the constitutionality of judicial review was questioned. Judicial Review is the theory that judges/courts can strike down laws as “unconstitutional” and also thwart presidential policies by decree. To some, this sounds good. What if the president or Congress becomes tyrannical? Judges, up to the Supreme Court, can then look into their misdeeds and apply the law to save us. That’s a pleasant thought, isn’t it? But is that how it actually works? Noble judges whose only fidelity is to the law, serving as the ultimate guardians of our Constitutional Republic?

Can a law mean two separate and opposing ideas simultaneously? No, of course not. Can a law as written be specific in its intent yet be construed, contorted and twisted to mean something totally unrelated? Common sense would indicate no but the answer is yes, it happens routinely. That’s the reason we have split court decisions such as the 7-2 Roe v Wade decision “legalizing” baby murder and the 5-4 Obergefell v. Hodges decision “legalizing” sodomite marriage. The “why” is that there are two prevailing judicial philosophies in play; Original Intent and Judicial Positivism. Proponents of Original Intent (Originalists) view laws as they were debated, intended and written. They say and mean today exactly what they said and meant when they were passed. You’d think this would be the only sane and acceptable judicial philosophy a judge could hold.

Or are laws essentially without form until given meaning by the typically liberal opinions of a plurality of judges, as is the foundational philosophy of Judicial Positivism; the jurisprudential idea that the legitimacy of a law depends on its being enacted in proper form (as a judge sees fit), rather than on its content (what the legislators debated, intended and established). This latter sort of thinking is precisely why the writers of the Constitution, in their wisdom, did not bestow the power of judicial review to the judiciary though it was indeed discussed. Yet over time, such an important issue can be omitted from the public discourse. Fundamental principles are forgotten. And a distracted, complacent, and yes, ignorant people can be led to believe things that were never true. Things like judges can make new laws by altering or abolishing existing ones. Combining unconstitutional judicial review with the widespread cancer of Judicial Positivism has made a mockery of the rule of law, spearheaded the destruction of God-given morality across the culture, and has proven deadly to our babies.

Also known as judicial activism, Judicial Positivism has five basic tenets as outlined by John Eidsmoe in his excellent book, “Christianity and the Constitution”. My comments follow each bullet point.

This ideology openly rejects the God of the Bible. Sir William Blackstone was an English Jurist (judge). His “Commentaries on the Laws of England” was the primary law book of the founders; those who authored and established the US Constitution. His ideas reflect 1500 years of Western Civilization jurisprudence. Said Blackstone: “Man…must necessarily be subject to the laws of his Creator, for he is entirely a dependent being…And, consequently, as man depends absolutely upon his Maker for everything, it is necessary that he should in all points conform to his Maker’s will.” That means that God’s law aren’t just for “religious” life, but are foundational to proper civil laws as well. Again Blackstone: “No enactment of man can be considered law unless it conforms to the law of God.” Abortion does not.

The Declaration of Independence represents the philosophy, spirit and cause of our nation’s founding while the Constitution is the resultant legal document that establishes the new government of that founding. The Declaration of Independence begins, “WHEN in the Course of human Events, it becomes necessary for one People to dissolve the Political Bands which have connected them with another, and to assume among the Powers of the Earth, the separate and equal Station to which the Laws of Nature and of Nature’s God entitle them, a decent Respect to the Opinions of Mankind requires that they should declare the causes which impel them to the Separation.” Nature’s God refers to the God of the Bible. Laws of Nature are God’s laws as written in the Bible. God is both the law-giver and the source of human rights. The second paragraph of the Declaration of Independence states; “We hold these truths to be self-evident, that all men are created equal, that they are endowed by their Creator (God) with certain unalienable Rights (rights that no man or government can lawfully take from an individual), that among these are Life, Liberty and the pursuit of Happiness.”

Abortion is the elective murder of a proscribed portion of our population, the innocent unborn. Lawless judges revere recent liberal precedent and abortion sets a dangerous one. What’s the next class of people that can be murdered? How about babies after birth? That’s called Infanticide. Democrats just blocked a bill in the Senate that would have required medical care to babies that survive abortions. Then there’s this:

“Both a fetus and a newborn certainly are human beings and potential persons, but neither is a ‘person’ in the sense of ‘subject of a moral right to life’. We take ‘person’ to mean an individual who is capable of attributing to her own existence some (at least) basic value such that being deprived of this existence represents a loss to her… Merely being human is not in itself a reason for ascribing someone a right to life.” – Alberto Giubilini & Francesca Minerva, Journal of Medical Ethics, Volume 39, Issue 5

With this view in mind, are there any limits to who can be murdered? How about the old? The infirm? Those holding the wrong political view? Christians? Don’t think this hyperbole, these groups have comprised the victims’ lists of various past and present tyrannies. And will again.

Article 6 continues, “The Senators and Representatives before mentioned, and the Members of the several State Legislatures, and all executive and judicial Officers, both of the United States and of the several States, shall be bound by Oath or Affirmation, to support this Constitution;” All judges, at every level, are bound by an oath to support the Constitution as written, no rewriting option given or inferred, no interpretation needed when laws plainly state what they mean.

By such direction, judges’ opinions become law while the laws themselves are ignored. Legal Positivism has led to wicked outcomes such as abortion, sodomy and sodomite marriage being “legalized” while removing prayer and the Bible from public schools. Remember, “legal” does not make something that’s immoral in God’s eyes, lawful.

“Then Peter and the other apostles answered and said, We ought to obey God rather than men.” (Acts 5:29)

Abortion is an evil that liberals couldn’t pass legislatively so they took it to the judiciary for the dictatorial edict of the Roe v Wade decision. We can glean much in the dissenting opinion of Justice William Rehnquist, later to become US Supreme Court Chief Justice.

“To reach its result, the Court necessarily has had to find within the scope of the Fourteenth Amendment a right that was apparently completely unknown to the drafters of the Amendment. As early as 1821, the first state law dealing directly with abortion was enacted by the Connecticut Legislature. By the time of the adoption of the Fourteenth Amendment in 1868, there were at least 36 laws enacted by state or territorial legislatures limiting abortion. While many States have amended or updated their laws, 21 of the laws on the books in 1868 remain in effect today.”—Supreme Court Justice William Rehnquist

The Fourteenth Amendment was passed by Congress June 13, 1866 to extend citizenship to all former slaves after the end of the Civil War in 1865. That was its sole intent. The subject of abortion was never brought up in the debate, mentioned in the Amendment, or was in any way part of the ratification process that concluded July 9, 1868.

If anything, this passage, “nor shall any State deprive any person of life, liberty, or property, without due process of law”, should strongly condemn depriving babies, which are unborn persons, of life through the murder of abortion. Yet the intent of the 14thAmendment in Roe v Wade wasn’t followed, a liberal political agenda was.

“I find nothing in the language or history of the Constitution to support the Court’s judgment. The Court simply fashions and announces a new constitutional right for pregnant women (186 years after the Constitution was written) and, with scarcely any reason or authority for its action, invests that right with sufficient substance to override most existing state abortion statutes. The upshot is that the people and the legislatures of the 50 States are constitutionally disentitled to weigh the relative importance of the continued existence and development of the fetus, on the one hand, against a spectrum of possible impacts on the woman, on the other hand. As an exercise of raw judicial power, the Court perhaps has authority to do what it does today; but, in my view, its judgment is an improvident and extravagant exercise of the power of judicial review that the Constitution extends to this Court.” –Supreme Court Justice Byron White

So pervasive is the idea that the judiciary is given the authority of judicial review that Justice White indicates his belief in it, even while rejecting Judicial Positivism in his dissent of the horrific Roe v Wade decision. Pragmatism, perhaps.

So here we are, the way things are rather than the way things should be. What, pray tell, is our duty before God as Christians and citizens? “Murdering Babies Part 3; Legacy of a Dead Nation Walking” will answer this question in the conclusion of this article series.

One thought on “Murdering Babies Part 2: Are Judges Above the Law?”