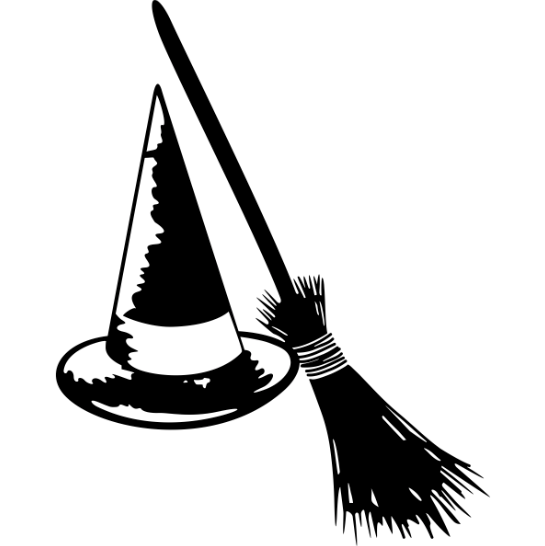 When I was a kid, I got a board game called Which Witch? It looked like fun on the catalog page and was kind of spooky; both kids and adults are drawn to that. The game featured two bad witches and a good one as you moved your playing piece through a three-dimensional haunted house. “Which Witch?” always reminded me of Halloween. Speaking of which, I have many fond memories of dressing up and going trick-or-treating. Innocent, harmless fun, right? I wish, but no and no to the first two points. The occult and those pathways that celebrate or lead to it are neither innocent nor harmless. They have a purpose, but yes, they can be fun, at least at first. All sin is alluring and fun in the moment.

“(Moses chose) rather to suffer affliction with the people of God, than to enjoy the pleasures of sin for a season;” (Hebrews 11:25)

Whether in the moment or for a season, the pleasure will pass and the consequences set in. Satan’s sole purpose for sin is your torment afterwards. No drug addict (illicit hallucinogenic drugs are another path to demonic spirits) or alcoholic were thinking long term when they took their first hit or drink. They just wanted to try what they were told would be fun. The misery that follows is not advertised at the time. So much more the direct enticements of Satan to your mind and soul through dabbling in the occult. It’s been said, legitimate pleasure you pay for beforehand, illegitimate pleasure you pay later, at a much higher cost than you realized.

In 2016, eight of us went to protest outside where Theresa Caputo, the Long Island Medium, was scheduled to speak. We didn’t block access, shout at people or threaten in any way. Tickets were something like $40 to $75 I was told. Throngs of people were going in, mostly women. As they walked by, we’d ask if they were Christians. Many stated that they were.

“There shall not be found among you any one that makes his son or his daughter to pass through the fire (child sacrifice; today known as abortion), or that uses divination (the practice of seeking knowledge of the future or the unknown by supernatural means), or an observer of times, or an enchanter, or a witch. Or a charmer, or a consulter with familiar spirits, or a wizard, or a necromancer. For all that do these things are an abomination unto the Lord: and because of these abominations the Lord thy God doth drive them out from before thee.” (Deuteronomy 18:10-12)

When we told these people that God forbids such things and that by attending such an event they were opening themselves up to the occult, to demonic influence, we were told to “shut up” or “the Bible doesn’t say that” or “it’s just entertainment”.

Paying money to be in the presence of conjured demons. Just entertainment.

“Regard not them that have familiar spirits, neither seek after wizards, to be defiled by them: I am the Lord your God.” (Leviticus 9:31)

Undeniably there are satanic forces known by many masking names that manifest supernatural powers, such as impersonating demons mimicking departed loved ones to fool grieving people into believing that they’re talking to the dead. Those engaging in this demonic practice are opening their minds and souls to these wickedly powerful beings. Demonic influence, oppression and possession still happens today just as it did in Jesus’ day. Even casual interest in the occult is the invitation these evil spirits desire. You’ll hear of “white magic” (good or selfless) and “black magic” (selfish, malicious or destructive). Nonsense. All “magic” is evil as all occult energies comes from Satan. It’s all black and leads to the same place, just different paths. This is why God forbids everything of the occult; Ouija boards, fortune-telling, tarot cards, astrology, séances, incantations, spell-casting, and conjuring, amongst others. If you’re involved in any of these things, the devil has established a hold over you. You aren’t in charge, you’re being manipulated, lied to, and led on. Satan has only one goal but many methods. That goal is to see you die unsaved by the atoning blood of Jesus Christ and to stand before God for eternal judgment. Satan wants you to go to Hell. Everything he does is predicated on that outcome. Everything.

Back to the Long Island Medium, our efforts outside that packed arena stopped just one person from going in. Was he worth it? You bet he was. We prayed as the event started for those in attendance. We found out later that the demonic vibe usually present at these sort of events had been disrupted. God had interceded through the heartfelt pleas of nine of us. Yes that man that didn’t go in added his voice to our prayers. Evil, that evening, had been suppressed by God through our beseeching Him in prayer. There’s power in prayer.

“And it came to pass, as we went to prayer, a certain damsel possessed with a spirit of divination met us, which brought her masters much gain by soothsaying: The same followed Paul and us, and cried, saying, These men are the servants of the most high God, which shew unto us the way of salvation. And this did she many days. But Paul, being grieved, turned and said to the spirit, I command thee in the name of Jesus Christ to come out of her. And he came out the same hour.” (Acts 16:16-18)

Notice Paul didn’t address the woman, he addressed the demon within her and cast it out. It was the controlling element, not her. Her life and soul were no longer her own. But why cast it out? After all, she (the demon through her) was telling the truth. That’s good, right?

Because evil, even when seemingly benign, always has a dark purpose. The demon sought to align with Paul’s work, only in appearance, for the purpose of later self-promotion. Had Paul allowed this, it would’ve been viewed as assent with the demon. God is the God of His own might and virtue, he never partners with evil. Thus, anything outside of God’s infinite power comes from Satan’s limited authority for the purpose of human anguish and destruction.

Recently I’ve heard from a couple of occultists that those who practice witchcraft are prominent members of our community. Doctors, lawyers, politicians, and the like. Yeah, I’d heard this before, thirty years ago, from Kansas City, Kansas Homicide Detective Lee Orr. Lee was familiar with several occult murders in the area, including the infamous, Satanist serial killer Bob Berdella. Berdella ran an occult shop, Bob’s Bizarre Bazaar. His is a particularly gruesome story of torture, cannibalism and unspeakable acts. Detective Orr specialized in his off duty time, and after retirement, in investigating occult-related crimes. His experiences, what he saw, was real, just as Satan is real. I talked at length with Lee. This was the darkest of the dark in the occult world. Whatever you’ve been told, whatever you may believe, occultism is Satanism. That was Lee’s point. It was more secretive at the time and more prevalent than the average person expected. To the latter point, it still is. Many simply don’t recognize the signs or implications.

Halloween is the highest of four unholy nights in the occult, one in each of the four seasons. Every Halloween there are ritualistic animal and human sacrifices of the most perverse nature. Some of those that go missing every year are abducted for this purpose. It’s unimaginable human evil. You probably didn’t want to read this but you need to know and understand.

There are others reading here who may be involved in the occult/witchcraft/paganism that will exclaim, “That’s not me!” Okay, thank God it isn’t. But while there’s a hierarchy of demons, they don’t have differing levels of goodness or wickedness. They are all of the same malevolent nature as their leader, the devil. The goal, whatever the enticement, is your destruction with as much damage done to you as they can inflict; physical, emotional, mental and spiritual. They’ll take you as far as they can, farther than you initially wanted to go. So whatever your level of interest in the occult, Satan has a lying option. No, not all are participating in the horrible acts described above, most aren’t. However the demonic presence is there, whispering, lying, deceiving; blinding the captivated soul to the reality of what they’re dealing with.

“But if our gospel be hid, it is hid to them that are lost: In whom the god of this world (Satan) hath blinded the minds of them which believe not, lest the light of the glorious gospel of Christ, who is the image of God, should shine unto them.” (2 Corinthians 4:3-4)

Christians, are you warning people about such things? Are you seeking to protect and disciple those “baby” Christians in your influence? Pastors, are your church members aware?

“For every one that useth milk is unskillful in the word of righteousness: for he is a babe. But strong meat belongeth to them that are of full age, even those who by reason of use have their senses exercised to discern both good and evil.” (James 5 13-14)

Can you discern good from evil? Are you doing it?

Everyone is spiritual in nature by God’s design, there is no neutrality, there is no apart from the spiritual realm. If you’re not saved by the atoning blood of Jesus Christ, you’re choosing the authority of Satan, an authority you give him, in some manner. Demonic possession, demonic influence or demonic oppression. Those living in darkness, who know not the light of Christ, are subject to these things. Apart from Jesus, there is no defense. The most vile behaviors and actions come from this wicked presence.

Now we have Pagan Pride fests. One is scheduled for my community next year. The question isn’t should a person be able to believe what they want, they should. It’s a principle of Christianity that God gives you a choice of what you choose to believe that should never be subject to physical coercion. The concept is called Individual Soul Liberty. However it’s not a Christian virtue to personally or publicly tolerate that which God has declared to be evil. That idea comes from the secular world, not the Bible. We are to voice our opinion, as is our right and duty to do so. If you won’t be light, who else will be?

“Beloved, when I gave all diligence to write unto you of the common salvation, it was needful for me to write unto you, and exhort you that ye should earnestly contend for the faith which was once delivered unto the saints.” (Jude 3)

Pagan Fests, like Gay Pride Fests, seek to force, at the very least, tacit acceptance from the community. I’ve offered insight as to what this entails. Would you like a greater satanic presence in your community?

“For we wrestle not against flesh and blood, but against principalities, against powers, against the rulers of the darkness of this world, against spiritual wickedness in high places.” (Ephesians 6:12)

Where do these dark powers ultimately lead? The same place that all lost in sin go to.

“But the fearful, and unbelieving, and the abominable, and murderers, and whoremongers, and sorcerers (witchcraft), and idolaters, and all liars, shall have their part in the lake which burneth with fire and brimstone: which is the second death.” (Revelation 21:8)

That sounds pretty final, doesn’t it?

One thought on “A Christian View of Witchcraft and Paganism, AKA The Occult”

Follow The Shining Light Ministries on WordPress.com
Join 1,554 other subscribers